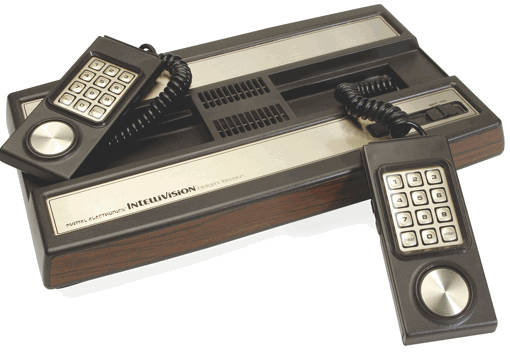 The entire classic Intellivision community made this FAQ! Intv Prime has assembled and curated the info, but is not the core source.

When there is more to see, Intv Prime will work to add it!

Visit www.intvprime.com/contact/, or send an email to the contact address, note the section (eg 2.5 for controllers), and we will work with you to make an update. The community makes this better!

At the end of 1979, Mattel Electronics (a division of Mattel Toys) released a video game system known as Intellivision along with 12 video game cartridges. Poised as a competitor to the then king of the hill Atari 2600, Mattel Electronics called their new product "Intelligent Television" , stemming largely from their marketing plans to release a compatible computer keyboard for their video games console. Mattel’s marketing was anything but intelligent and almost destroyed the company by 1984. In one sense the system was very successful, with approx 4 million units (maybe 5 including variant consoles) sold and 125 games released before the system was discontinued by INTV Corp. in 1990.

The original Master Component was test marketed in Fresno, California in late 1979. The response was excellent, and Mattel went national with their new game system in late 1980. The first year’s production run of 200,000 units was completely sold out! To help enhance it’s marketability. Mattel also marketed the system in Sears stores as the Super Video Arcade, and at Radio Shack as the Tandyvision One in the early 1980’s.

1980 was a turbulent year for the Intellivision. Mattel announced that an "inexpensive" keyboard expansion would be available in 1981 for the master component to be dropped into. This was to turn the system into a powerful 64K home computer that could do everything from play games to balance your checkbook. There was a great deal of marketing money and press coverage devoted to this unit; a third of the box for the GTE/Sylvania Intellivision describes the features of this proposed expansion. Many people bought an Intellivision with plans to turn it into a computer when the expansion module was released. Months, then years passed and the original expansion keyboard was released only in a few test areas in late 1981. With the price too high and the initial reaction poor, the product was scrapped in 1982 before being released nationwide.

1982 saw many changes in both the video game industry and the Intellivision product line. A voice-synthesis module called IntelliVoice made sound and speech and integral part of gameplay, through the use of special voice-enhanced cartridges. The Intellivision II was also released this year, which one company spokesperson described as "smaller and lighter that the original, yet with the same powerful 16-bit microprocessor". The new console was more compact than the first, and its grayish body made it look more like a sophisticated electronic device than the original design.

1983 brought more promises from the folks at Mattel, the most significant of which being the Intellivision III. This was shown off at the January 1983 CES show, and lauded in the video game mags for many months afterwards. In June of 1983 at the Summer CES show, Mattel announced it was killing the Intellivision III and including most of its high-profile features into their long-awaited computer expansion, the Entertainment Computer System.

Probably the most ambitious effort the Intellivision team had undertaken, the Entertainment Computer System was comprised of a computer keyboard add-on, a 49-key music synthesizer, ram expansion for the keyboard add-on to expand it to a full 64K RAM and 24K ROM, a data recorder to store programs, a 40-column thermal printer, and an adapter which would allow you to play Atari 2600 games on your Intellivision. The RAM expansion modules, data recorder, and thermal printer never made it past the drawing board, and the music synthesizer had but one software title to take advantage of its capabilities. While the 2600 adapter greatly expanded the library of available games, much of the steam this generated had already been stolen by Coleco’s own expansion module.

1984 would spell the end of the original Intellivision as the world knew it. Terry E. Valeski, Senior Vice President of Marketing and Sales at Mattel Electronics, along with a group of investors, purchased the assets, trademarks, patents, and right to the Intellivision in January of 1984 for $16.5 million dollars. The purchase was backed by financing from Tangible Industries, a division of Revco Drug Stores. The newly formed company was originally called Intellivision, Inc., and later renamed INTV, Inc., after Valeski negotiated all rights from Revco in November of 1984. During the next two years, the new company would lie dormant while plans were being made for a re-emergence.

In the fall of 1985, the INTV System III (also called the Super Pro System) appeared at Toys ‘R Us, Kiddie City, and in a mail order catalog sent to owners of the original Intellivision direct from INTV. The new console was of the same general design as the original master component, except it sported a fresh black plastic shell with brushed aluminum trim. Several new games accompanied the release of the new system, and 1985 would register over $6 million dollars in sales worldwide, indicating that INTV Corp. had indeed revived the Intellivision. INTV continued to market games and repair services through the mail with great success. Between 1985 and 1990 over 35 new games were released, bringing the Intellivision’s game library to a total of 125 titles.

Many more changes were to come during the final six years of Intellivision’s useful life. In 1987, an improved master component called the INTV System IV was shown at the January CES, which sported detachable controllers and a timing device. Unfortunately, this never saw the light either. In the fall of 1988, INTV re-introduced the computer keyboard adapter through their mail order catalog on a limited quantity basis. In 1990, INTV discontinued retail sales of their games and equipment and sold them only through the mail channels. The change in marketing was due to agreements with Nintendo and Sega to become a software vendor for the NES, Game Boy and Genesis. In 1991, INTV sold out its stock of Intellivision games and consoles, and the company gradually faded away. The original incorporation is dormant for years.

1.0: How many Intellivisions were sold?

1.1: Who created the Intellivision?

1.1: When was the Intellivision designed?

The console was officially announced on December 3, 1979, which has come to be called "Intellivision Day".

1.1: What were initial Intellivision games?

Poker & Blackjack, Math Fun, Armor Battle, and Backgammon were successfully test marketed in 1979 in Fresno, California as launch titles. 1980 was the major worldwide release in Los Angeles, New York City, and Chicago.
Retailers had to train for 18 hours over 3 days to understand the system.

1.2: What is the classic Intellivision timeline?

To make a list of the innovations Intellivision brought, those could be considered as the first 16-bit game console, as it has a 16-bit microprocessor, it was the first home console and one of the first video games to use a tile based playfield, it allowed for the display of detailed graphics and colour with very little RAM, was the first game console to provide real-time human voices in the middle of gameplay, courtesy of the IntelliVoice module, the first game controller with a directional thumb, the first to offer a musical synthesizer keyboard and World Series Major League Baseball (1983) is considered to be the first sports simulation video game with a number of specific innovations such as multiple views of a 3D calculated virtual play-field, statistical based game-play using real historical baseball player statistics, manager player substitutions, play-by-play speech, and save games or lineups to tape storage.

1.2: How does the Atari VCS compare to the Intellivision?

The VCS (Video Computer System), later called the 2600, was a simple home video game created by Atari in the mid 1970’s. It retailed for USD $199 (equivalent to $849.88 in 2020) and became the dominant home system in the second era of home video games. The low graphic resolution, simple control and play, and lack of sophistication made it the perfect foil for Mattel to leapfrong with the Intellivision console 2 years later.

1.2: How does the Colecovision compare to the Intellivision?

Taking away the Colecovision ports, the number of quality games with replay value is low.

Compromises exist in Colecovision game versions (eg not capable of showing 4 sprites on same line without flicker). The "superior system" label depends on the games played and the time the games are played. The ColecoVision clearly has the best home-arcade ports of the 1980s, while the Intellivision had better-playing and controlling sports and party games. 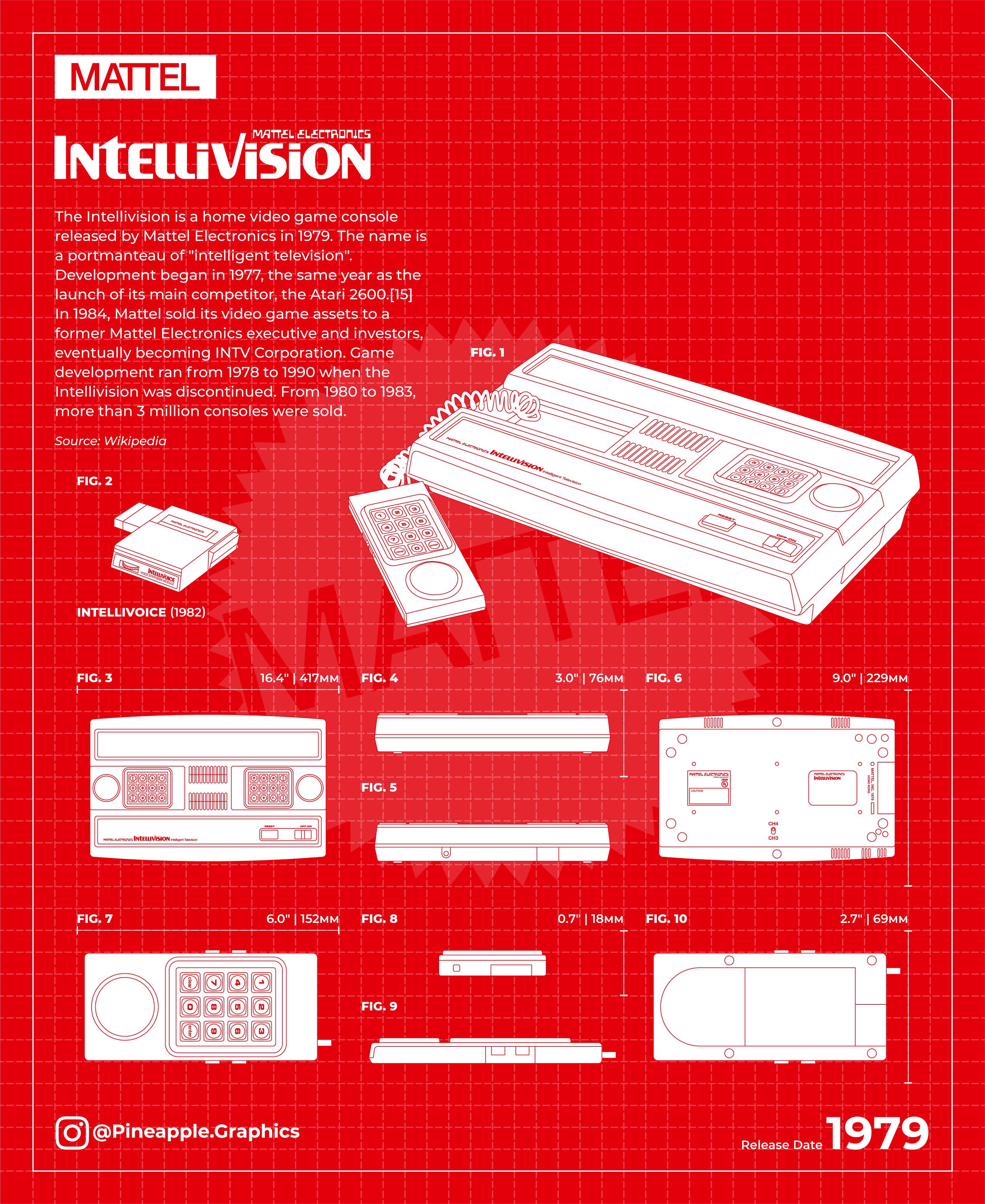